“they ate, they drank, they planted”; “eating, drinking, dressing, walking”

I had kind of noticed these passages in Uncle Tom’s Cabin as memorable.

“Well,” said Augustine, “there goes an old saying to this effect ‘As it was in the days of Noah, so shall it be;—they ate, they drank, they planted, they builded, and knew not till the flood came and took them.‘”

And this one, in her narrator’s voice, after Eva dies:

But in real life we do not die when all that makes life bright dies to us. There is a most busy and important round of eating, drinking, dressing, walking, visiting, buying, selling, talking, reading, and all that makes up what is commonly called living, yet to be gone through; and this yet remained to Augustine.

Though I have not seen it noted in annotation, and perhaps not needed in first, they are allusions, the activities that consume our time, similar ones that in times of Noah and Lot consumed them, just prior to destruction. In 19C Authorized KJV, the passages in Luke 17:26-28 and Matthew 24:38–39 are quite similar.

And as it was in the days of Noe, so shall it be also in the days of the Son of man. They did eat, they drank, they married wives, they were given in marriage, until the day that Noe entered into the ark, and the flood came, and destroyed them all.

For as in the days that were before the flood they were eating and drinking, marrying and giving in marriage, until the day that Noe entered into the ark, and knew not until the flood came, and took them all away; so shall also the coming of the Son of man be.

But I realized recently that Stowe omits one activity in her allusions–the marriage phrases–and that would be because with Eva dead St. Clare now that his daughter has died shall have no daughter to give, no son-in-law to receive in marriage.
In Sunny Memories of Foreign Lands, the allusion recurs once more, and it shows her 19th-Century sensibility merging scripture with the present. It follows a very affecting passage on Walter Scott’s epitaph for his dog Maida, which is well worth reading but not much read anymore because mid-century travel narratives are not very popular. 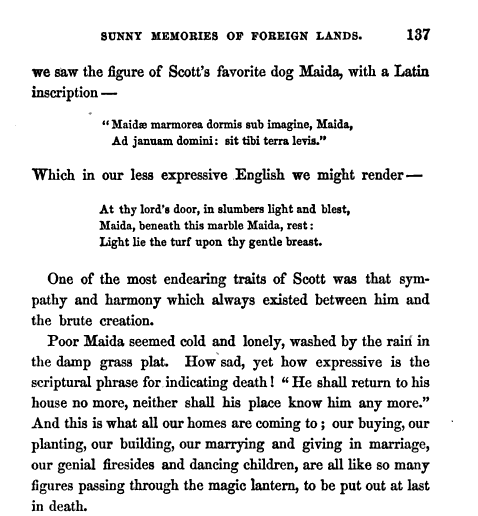 And this is what all our homes are coming to; our buying our planting our building our marrying and giving in marriage, our genial firesides and dancing children, are all like so many figures passing through the magic lantern, to be put out at last in death.

The magic lantern is the 19th-century fore-runner of the picture show, but the “put out at last in death” hits me like the train in Willa Cather’s “Paul’s Case,” for I know that the memory of 18-month-old son Charley, who died in a Cincinnati cholera epidemic, lies in the silent background of that line.

This is just to let you know that when Stowe alludes to scripture, and omits or recasts, often there’s something going on, something significant. Yea, I know it’s domestic fiction. But your (our) not knowing what she’s doing doesn’t make her any less talented. That is, she don’t cite carelessly, despite her reputation. When reading Sunny Memories I am awed at her prodigious verbal memory. The Walter Scott alone exhibits a staggering range, and there’s a real sadness that upon landing in and touring Scotland, to her the entire landscape rendered picturesque and enchanted (her terms) by her memories of reading Scott, she discovers that the people with whom she expected to enthuse in shared admiration have mostly set him aside.

This entry was posted in annotation, uncle tom's cabin. Bookmark the permalink.